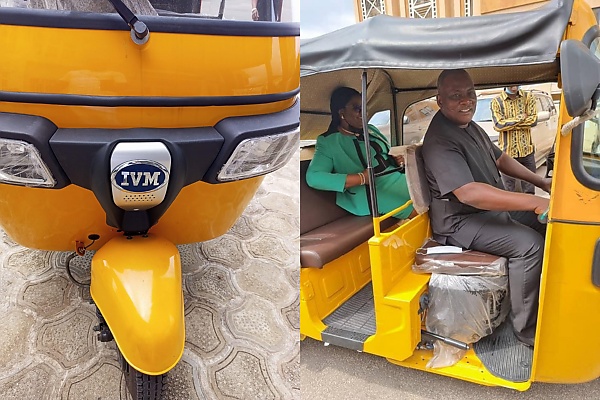 Tricycles, popularly known as Keke Napep, are one of the standard methods of transport in Nigeria. Before Now, people used cars and bikes for transport on roads, but now, tricycles are becoming dominant in this space. It is also true that the average cost of Keke NAPEP witnessed a tremendous increase over the last 3 years because most of these are imported from different parts of the world like India (BAJAJ). Today on Fastgidi.com, we are taking a look at Innoson Keke Price.

You might wonder why people prefer this medium of road transport so much now – it’s not far-fetched. Moving with Keke Napep has winning advantages over other transport media, though there are some little downsides.

First of all, tricycles are obviously safer than bikes/motorcycles. The rate at which bikes experience accidents nowadays and people lose their lives is alarming. A bike man could lose control, and everything ends there!

Apparently, such isn’t the case with tricycles. Unlike bikes having only two wheels, tricycles have three wheels allowing for improved balance when in motion.

In addition, I will choose a tricycle over a bike because of extreme weather conditions. It could be raining heavily, and you will hardly get wet when in a Keke Napep, unlike when you are on a bike, you will get thoroughly drenched in water.

However, there are also reasons why people won’t bother about boarding a Keke when bikes are included in their options. A perfect reason is that tricycles are not as fast as bikes. In fact, tricycles are just like trains; they can be very slow.

With all these advantages and disadvantages, however, people still choose Keke, and its dominance on the streets is rapidly growing. I believe it will be a great choice to start an investment.

Generally, transportation in Nigeria is a good investment for money that begins to bring returns in as early as two months. The same is the case with the tricycle business. If you want to venture into this business for your use or rent out and collect returns, you should read this.

Unlike other popular tricycle brands in Nigeria like TVS, Piaggio, and Bajaj, to mention a few, Innoson Keke is not so famous. Innoson Vehicle Manufacturing, popularly known as IVM, is a Nigerian-owned auto manufacturing company.

The start-up kicked off in 2007 but started gaining attention around 2015. Earlier in 2022, the IVM company disclosed that it would be adding tricycles to its manufacturing portfolio. They also produced a few for test marketing to gather feedback from those interested.

How much is Innoson Keke?

Tricycles cost quite a lot in Nigeria, and all of them are imported, so there is a good reason for the high prices. The only way to cut these costs is by getting them within the country – What else is Innoson about if not to cater to this?

When IVM started in 2007, the aim was to promote the purchase of vehicles in Nigeria, thereby limiting the cost of importing them from neighboring countries. This vision has worked so well with many products of IVM, especially cars. Now, it’s time to integrate this vision with tricycles.

Unfortunately, Innoson has not disclosed how much it will be selling tricycles to Nigerians. The company is set to start bulk production around August/September, so they will not reveal the price till then.

You are to disregard fake news on the media that Innoson has begun producing Keke for sale. The only ones they made are for test marketing, just as I mentioned earlier; They are not for sale, and in fact, there are very few of them. Therefore, Innoson Keke price is not known yet.

What Areas will the Innoson Keke beat other Existing Brands?

It is a good cause to know what areas the Innoson Keke will beat other existing tricycle brands in the country; Remember, I mentioned earlier that the new tricycle would be a major competitor when it enters the Nigerian market.

First of all, in terms of fuel consumption. Although tricycles are designed for fuel efficiency, they will consume very little fuel for more significant duties. What if I told you that Innoson Keke has a better fuel efficiency than the existing brands?

It is rumored that an Innoson Keke will cover twice the distance a TVS tricycle will cover with the same quantity of fuel. How great must that have sounded? You don’t have to spend unnecessarily on fuel once you have the Innoson Keke.

Also, it would be easier and, of course, cheaper to purchase spare parts for the Innoson Keke since it will be manufactured in Nigeria. Spare parts of other tricycle brands are rarely available and cost a lot to import, especially when they are most needed.

With an Innoson Keke, you won’t have to pay as much as you will spend on spare parts and other vehicle materials; This is a massive advantage over other brands.

In addition, Innoson Keke will be well known for unmatchable speed. I mentioned earlier in this article that one of the downsides to tricycles is that they can be very slow, especially as they age. Innoson is set to change this narrative.

Tricycles from IVM will now compete with faster vehicles like bikes when it comes to speed. I believe you wouldn’t want to settle for less.

A tricycle costs an average of N700,000 in Nigeria – Imagine getting it for around half this amount; It Sounds impossible, right? Let’s wait till August/September so you can prove me right.